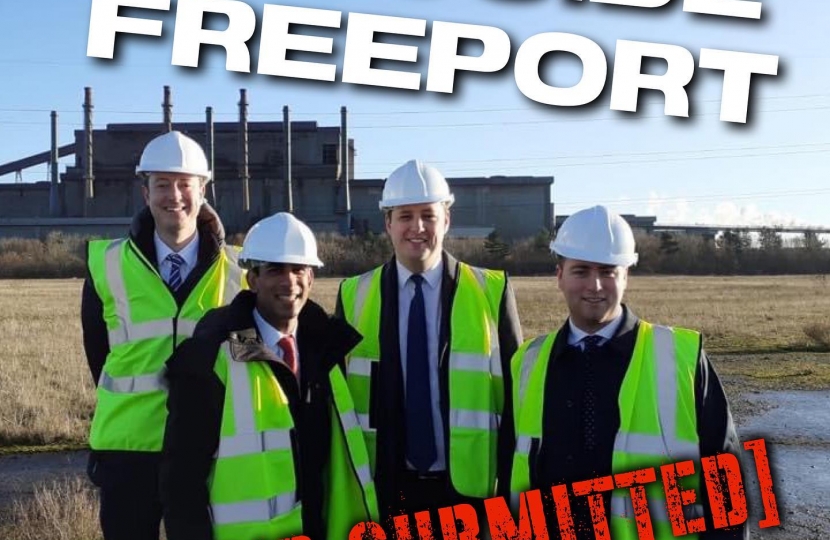 Today, MP for Redcar, Jacob Young announced that Teesside's bid for a  Freeport was successfully submitted to government; a task both himself and Tees Valley Mayor Ben Houchen have been working on since Jacob's election.

A Freeport could certainly have a significant impact on the prospects of Teesside as a whole - but Jacob argues that the benefits for Redcar & Cleveland specifically will be "staggering." A Freeport could mean a huge surge of investment for Teesside over the next 5 years. It is estimated that 18,000 jobs new jobs will be created within this time - the majority on Wilton and Teesworks.

Announcing the submission via his Facebook page, Jacob wrote: "When you consider the effect on the wider economy that inward investment on this scale would mean for Redcar & Cleveland alone - demand for housing, increased footfall for retail, well-paid employees with money to spend in our bars and restaurants - I cannot overstate the importance of this bid.

Outside the EU we're already beginning to see the tangible benefits for Teesside. These benefits are only achievable because of our decision to leave, the flexibility of the deal we have struck with the EU and because this Government that is prepared to back Teesside.

After decades of politicians being terminally negative, we're striding confidently into a global future which will truly put our area back on the map as an economic powerhouse - standing as the infant Hercules once more ."

You can read the full story here: http://www.gazettelive.co.uk/.../game-changing-freeport...

Jacob Young Lobbies for a Mass Vaccination Site in Teesside

Redcar MP Jacob Young is calling on the government to bring a mass vaccination site to Teesside, following the rollout success via local hubs such as James Cook University Hospital and Normanby Medical Practice. Currently, the closest mass vaccination centre to Redcar is in Sunderland.