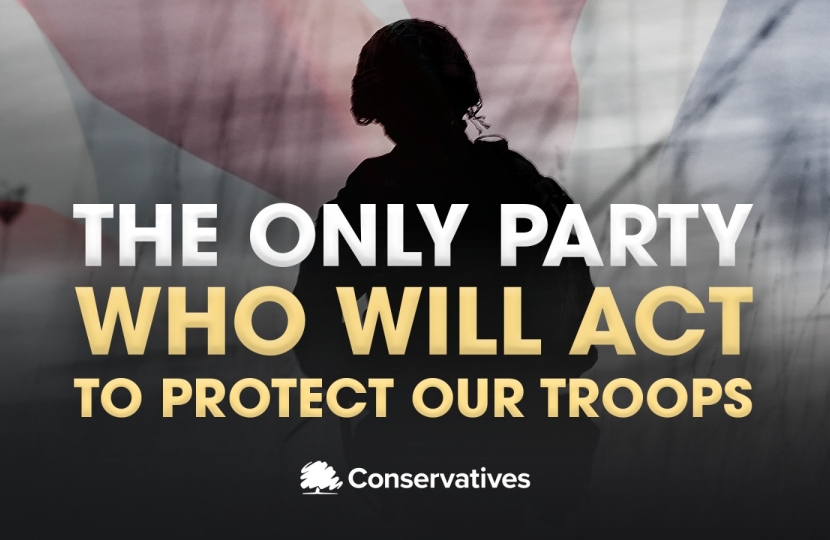 Yesterday we debated the Overseas Operations Bill in the House of Commons Chamber. I had prepared a speech but unfortunately we ran out of time during the sitting, so I thought I would share the text on here.

Many thanks to Rich Kingston and Gareth Howell who are two veterans from our area, who shared their story with me and how they felt this bill would help them and their former colleagues.

It was disappointing to see the Labour Party abstain on this Bill, and to have MPs like Jeremy Corbyn and Dianne Abbot voting against it. They may have a new leader, but it’s the same old Labour…

Please see full text of my speech below.

"Thank you, Mr Speaker. I rise to support a Bill which will finally address the
injustices faced by our Armed Forces and restore the fairness and respect with
which they deserve to be treated.

Military personnel, whether at home or on the ground, put so much on the line
to help keep us safe and are essential to peacekeeping and humanitarian
operations in conflict zones and in the wake of natural disasters.
We owe them so much yet over the past two decades, an increasing number of
cases have been brought against the Ministry of Defence and against our
veterans.

This is due to the unforeseen expansion of the European Convention on
Human Rights in the governance of armed conflict overseas, which over the
years has meant that legal judgements now tend to prioritise Human Rights
Law over International Humanitarian Law.

In plain language, this means that a legal system that was specifically
developed to recognise the risks and dangers both for service personnel and
the local populations is now progressively being replaced by a system built to
protect people from abusive power by Governments.

This is now being applied to military personnel and the Government they
represent while they are posted abroad.

The reason this is such a dangerous shift, Mr Speaker, is that we are slipping
towards a system that disproportionately favours one side over the other and
only considers the rights of one of the parties involved in a conflict.
This Bill seeks to redress that imbalance.

Having just joined the Armed Forced Parliamentary Scheme, I am seeing first-
hand the incredible work our troops do every day to protect our country and
defend our values.

They need to know that when they are deployed abroad or when they retire
from service abroad, we are grateful for what they do, and we will stand on
their side.
This means that we will not let lawyers with questionable intentions take
advantage of the situation and expose our brave veterans to vexatious claims
after they have done so much for our country.

The implications are far wider than the deep betrayal felt by those who return
home from battle and have to face repeated investigations.
Allowing our military personnel to be subject to such poor treatment at home
means increasing the risk of potentially fatal decisions taken during an
operation, due to the additional pressure of trying to avoid prosecution on
their return.

It also discourages people from joining the Armed Forces in the first place and
pushes more to leave as they no longer feel supported by the very thing they
swore to protect.

These are serious concerns echoed by those I spoke to from the military
community, including Rich, a veteran from my constituency, who was deployed
on operations between 2004-2009 including in Iraq and Afghanistan.
He expressed great relief at the thought that after so many years of service,
this bill would protect him from potential vexatious claims.

He also stressed that the rules of engagement are very well understood by
members of the Armed Forces and are there to keep actions legal.
Gareth, another veteran I spoke to from my constituency, served on
operational tours in Bosnia, Kosovo, Iraq and Afghanistan during over 23 years
of service.

He explained that each situation on the ground is unique and comes with its
own challenges, and the last thing our soldiers, sailors and airmen need is to
have doubt in their actions, wondering if they have the backing of their own
Government, as this could put lives at risk.

To finish, Mr Speaker, there is a saying in the Army that says, “I would rather
be judged by 12, than carried by 6”. In my opinion, this illustrates the extent of
the problem and I welcome that this Bill will put things right."